It’s intense.
Lots of things to think about.
Proper permits and licenses, taxes, advertising, marketing, business plan, bedspreads, photos, paint and stain, expenses…
All on top of the other regular drama of life? Holy smokes. It adds up.

It’ll all be worth it. Well, I hope. This is certainly going to be one heckuva ride, that’s for sure.

So buckle up. Things are just starting to get interesting around here. Again. 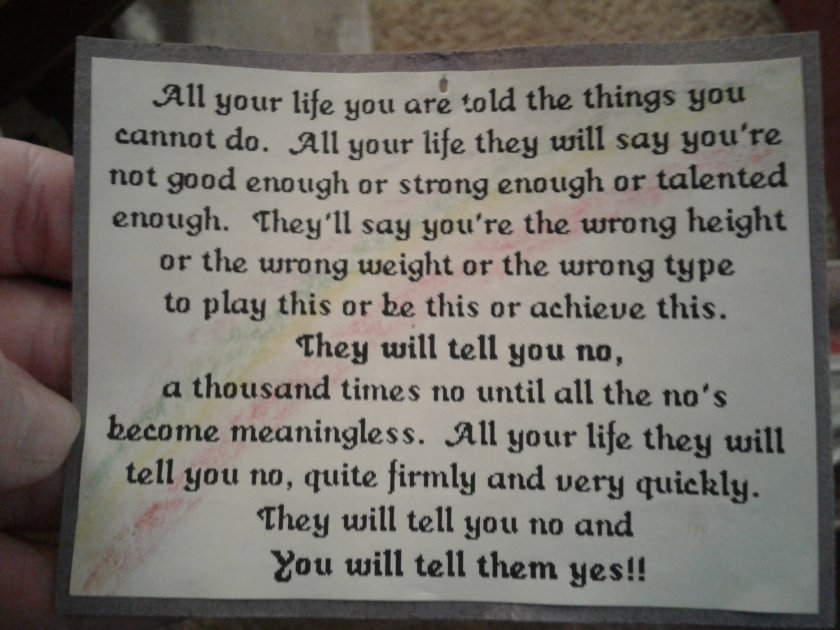 I cannot for the life of me remember what badge we were earning, or what project we had taken on. But she gave everyone in the troop one of these (I’m pretty sure). I’ve kept it, all these years.

Because it reminds me of my lovely girl scout days. Where I gained a number of skills I use to this day, where I gained some desperate my needed confidence in myself, and gained some lovely friends.

Because it reminds me that no matter how #&$!@% life gets, I’m still going to handle it like a boss, in my own way.

It also goes to show that one seemingly small act, can last a lifetime. I wouldn’t have a clue (nor would she), if we walked past each other at this point in life. But this one kernel, such a small vote of confidence in an angsty, young teenager, is still there.

Better if your acts and actions are used positively and kindly, no? I’d rather leave behind a legacy of kindness. Helping people out when I can. Or at the very least, just being nice. Complimenting someone on their mermaid hair. Or how cheerful and good they are at their job. Those don’t cost anything but several seconds of your time, but can immediately brighten someone’s day.

How are you going to brighten someone’s day today?

* * I’ve had this saved as a draft for longer than I should have.  Forgot to post.  So in between the herby stuff, here’s some cute kid stuff!  Once it gets nicer out, I plan to take more adventures with the kids as our schedules allow.  Meaning, more fun photos. * *

I have no shame.  We stop at all kinds of places.
We went out to wheat harvest for a few days.  The 12yo was off adventuring with Grandma and Auntie (and his soon-to-be uncle), so it was just me and the three youngers.  I don’t have any photos of them riding trucks or combine though, whoops.  This year was super easy.  My uncles were harvesting fields behind the farm house, so when we heard a truck rumbling, we’d run out to the driveway with a few kids, and then they’d get dropped off on their way down through the driveway to the elevator.  I just stayed at the house with the lone child, keeping an ear out for things.  Didn’t have to drive in my aunt’s big honkin’ truck up into fields of so. much. dust. and chaff, that take a while to get to because of all the hills.  Was seriously easy.

On our way out of town, we stopped in Ritzville.  Because duh, train museum.  Got a different docent this time – the usual guy was off puttering around doing something, so I chatted with another lovely lady.  Had the same last name as a distant-ish relative of mine (well, my mom’s), but apparently we aren’t related.  It’s a small county though, so who knows.  Plus Grandma was headed our way with the 12yo, so we just met them there so Grandma didn’t have to trek the extra two hours to my place.

But first, to kill time, we hit the cemetery.  More than a few relatives there, so I got to show the kids.  The 8yo and 10yo are named for my maternal grandmother, so they got to see her plot.  And then an aunt’s.  And then my own great-grandparents, so their great-great grandparents.  We could’ve wandered more to find any extra relatives there, but we found the ones I know more about.  Well, or at least know their names.

The blue shirt child (10yo) is in front of Grandma and Papa’s headstone.  Yellow shirt (6yo) is just exploring.

It really was a gorgeous day, despite the wind.

I know it’s weird.
But it *is* pretty cool being able to share family stuff and history and stories with my kids.  So they know some of their roots.  I have some friends who were adopted or have family issues that just don’t have that kind of knowledge/availability, so I’m incredibly lucky.  Like last year (or the year before?) when we visited my uncle and aunt for harvest.  Driving the same road Grandma drove us on when I was young, I regaled the kids with mouse stories.  When you live in the middle of wheat fields, there are mice.  Lots of mice. Grandma (their great-grandma) hated the mice.  She also had a bit of a lead foot.  Which is where I get that from.  Anyway.  She would swerve around the highway/road to hit the mice scurrying across the road.  Because then it’d be one less mouse to try to get into her house.  On the deserted parts of the road (which really, is most of it, to be honest), I may or may not slow down a bit and swerve to get a mouse or two.  It’s tradition.

Or when I told the kids about how the mice wore holes into places in the carpet, and even the basement door.  My sister and I got used to seeing mouse traps everywhere so somehow we knew not to touch them way back when.  So after the kids and I arrived, at one point they went to find the mouse-marked door because of my story.  Later that night or the next day, they started yammering on about it to my uncle.  Apparently uncle had been on the fence about replacing the basement door.  But now that the door has made it’s way into family folklore, he just might need to keep it.  😀  Again, I’m incredibly lucky.  An uncle and aunt bought one grandparents’ house, and my cousin and her husband bought my other grandparents’ house, so family is still in those houses from my childhood and we get to visit.