What people don’t seem to realize is how stressful school can be for kids. The expectations are insane. I can’t even imagine, I barely remember any standardized testing more than once every few years growing up. Then the PSAT and SAT. Not quarterly. Oof.

Making a transition from public school to public-school-at-home is a shock. Going from public school to homeschooling is a shock. Some amount of decompression is needed for kids to reorient and gather their bearings. Getting right into it may work at your board meeting or brainstorming meeting, but kids need a little more finessing. Meeting them where they are as it were.

So, I’m sure, some people immediately dug into things. I chose to observe. Changing up the whole schooling dynamic is going to result in some chaos of sorts, and I’ll be honest, I’ve got enough going on in my life. I’m glad I’m an essential worker so I can continue to provide for my children, however it means I have little time for nonsense. 140 emails from every single teacher and principal my four children have in three different schools, plus the school district notificarions and letters? Definite flashbacks/triggers to other email issues I’ve had in the past, and fairly overwhelming. Moral of the story? It’s okay to decompress. It’s okay to chill and take your time. Life will still be there to deal with the next hour, or next day.

Moving on, I came home from work one day, to find this amazingness going on due to leaving my kids to their own devices for the morning.

Here is the start. 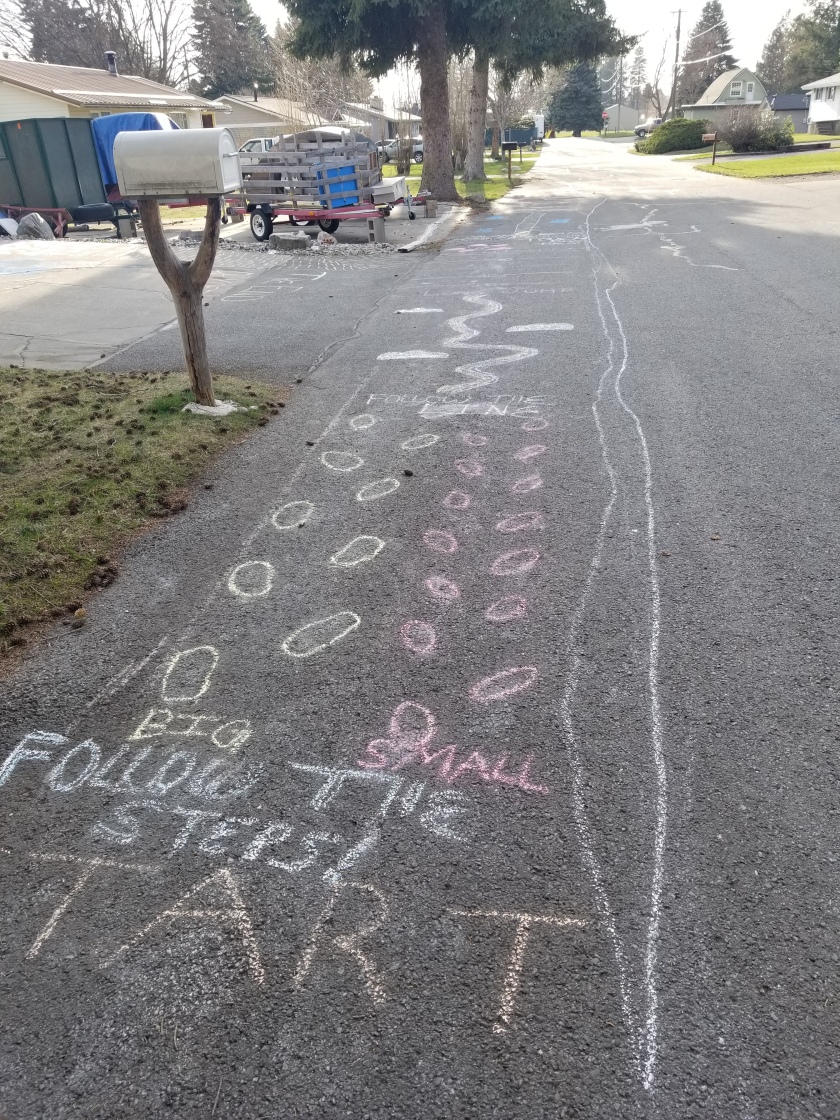 Touch your toes, and don’t fall off the balance beam.

Seriously one of my favorite parts, the floor is lava. Stay on the clouds. For real.

Follow the rainbow outlined face duck, over the bridge, to the yellow dotted road? (I just dig the cool lily they drew there.) 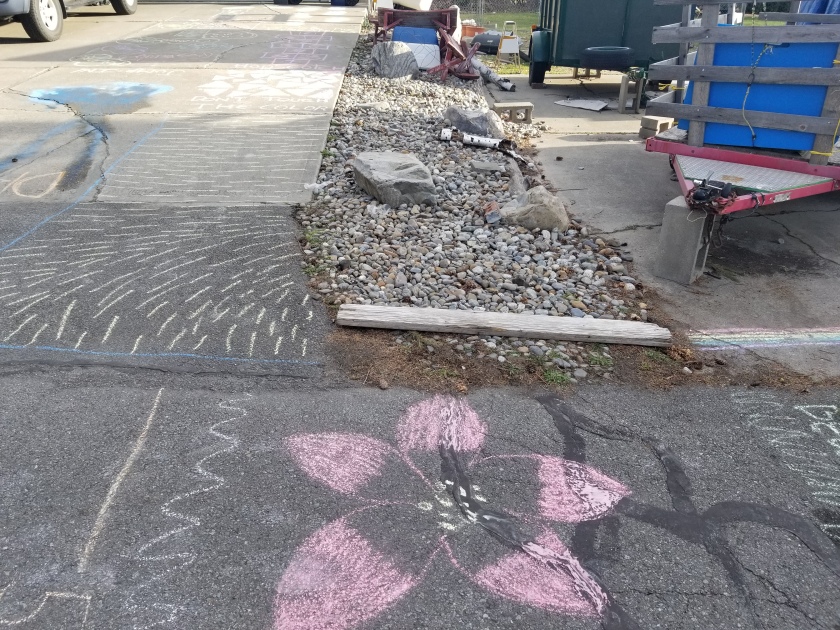 Variation of tiptoeing… then hopscotch of course. 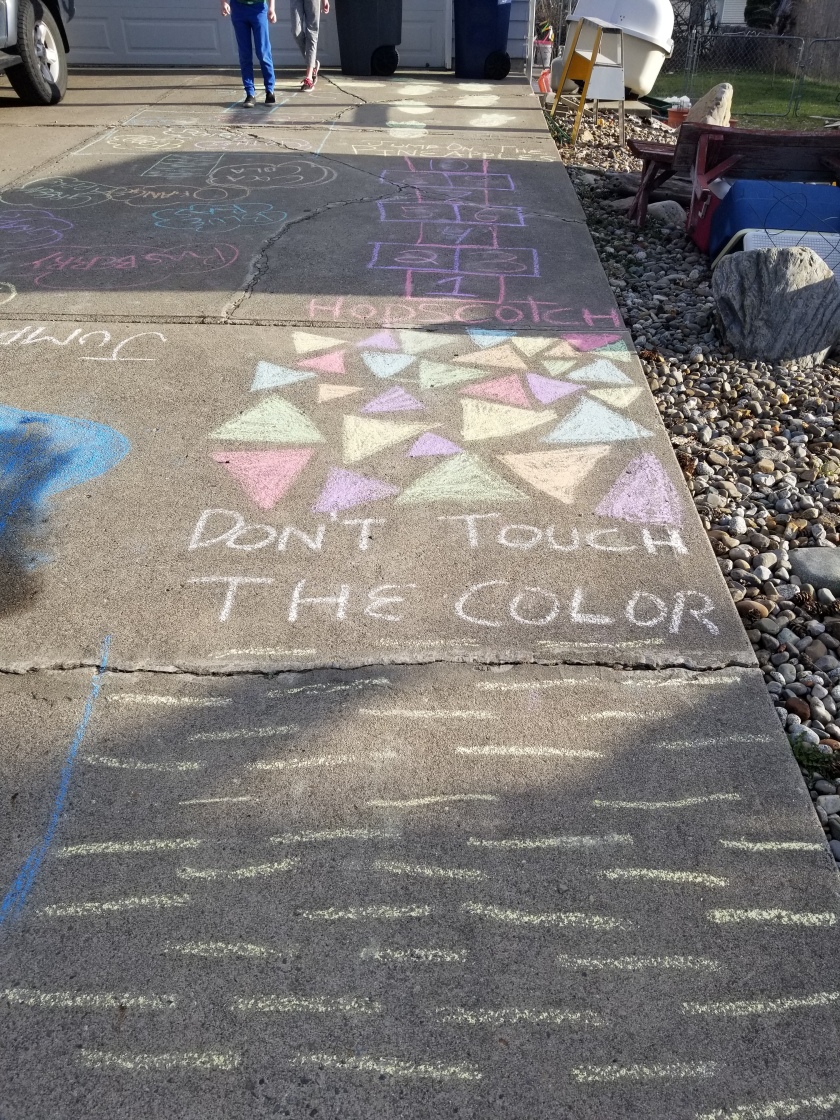 My other favorite part, jump the pineapples. Not sure why. Just, pineapples. 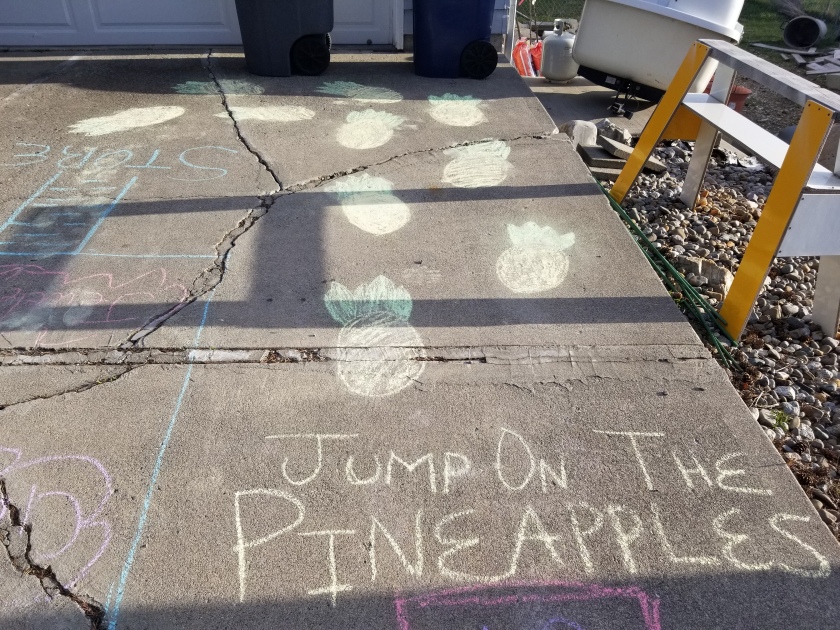 Then jump through the store and into a puddle or lake at the far end.

Numerous contests and races happened on this chalk course.

For those wondering why this is cool? Well first off, duh, the floor is lava, and you jump pineapples. Second, this kept kids busy and outside for five hours. No joke. They got their wiggles out. Got a ton of fresh air and vitamin D (great for immune systems).

For those keeping tabs, this is Art, Physical Education, Physics, and Math.

What on earth?! I don’t think I’ve ever gotten part of the garden in this early. Partly because of weather, partly because of laziness. The kids helped me get the northern raised bed done (well, they gave it about an 80% effort). Then I attacked half of the herb bed – pulling out weeds among the randomness I’ve put in there on purpose.

As much as I’d love to have a beautiful, perfect garden with rows or little bunches here or there, that’s not us. I plant where I have room, I detest weeding, and I want to get as much out of the yard as I possibly can. So, yup. It looks nuts.

But. I got things planted! I need to make sure it’s the arnica that took over one corner of the herb bed, the horehound/gravelrooot (I think, again) is starting to pop up. A bunch of apple smelling chamomile already came up, and is about to flower! Seeded the empty spaces there with even more chamomile (not sure we could end up with too much!), planted a few lupine seeds to appease my daughter, planted some lettuce, Parisienne carrots, and Szechuan red radishes. Plus sage that came back gangbusters, as did the comfrey, and we’ll see if the motherwort survived me when I get it in the ground.

In the front by the garage, my lamb’s ear (natural band aids!), comfrey, and horehound have come back, plus with a random tulip (I’ll take it!). They overwintered quite well.

Then the bed we yanked most things out of…
Left day lilies in the middle (of course), the overwintered shallots, the kale that overwintered and went to seed, and the random parsley that came out. Then, my girl helped me plant: Lisbon bunching onions, Vates blue curled kale, Grand Rapids lettuce, Oxheart carrots (supposed to be great for clay soils!) Jutrzenka radishes, golden beets, Slo Bolt lettuce, Green Zebra tomatoes (at 9yo’s request), two cages of melting sugar snap peas, Opolanka radishes, Walla Walla onions (this is a crapshoot, the seeds were home-saved, and a few years old), then above the shallots I just sprinkled seeds for calendula and Nevada lettuce all over the place and hoped for the best.

Good news, we got a bunch done, especially for my usual lack of energy (sidenote, which seems to be coming around, at least according to my last doctor appt!). So yay, progress!

I also cracked the whip on the kids and made them help me with stuff in the laundry room – because putting lint into toilet paper tubes is akin to child abuse to them. Sigh. I stained the shelves to go in the shower stall, they’ve basically been curing in the garage for a few days. So hubby will get those up so I can put away certain things there. Then I need to frantically catch up on laundry, and have him disconnect the dryer so I can get back there and finish painting that corner of the laundry room. Maybe even disconnect the washer, not sure yet. Still need to finish painting back there, regardless.

Hubby’s also been making progress on the entryway. Lots dug out. He put in new posts to hold up that roof. Now he’s working on gravel and leveling things out to start placing the edging stones for the different tiers.

There’s also been in-law drama the last few weeks, so that’s been fun. Things are a changin’. But anyway. Now to get the rest of the yard whipped into shape… need to put down weed cloth in the greenhouse and put some wood chips down on top (the weeds were insane there). Need to put chemicals on the Canadian thistle. And so on. It never ends. 🙂

All my fun herbage from a little apothecary shop in a city far away.

Lots of fun medicinal things – calendula petals, plantain leaves, nettles, alfalfa, feverfew, a ton of goodies.  I have a plan for storing them, but it’s still mostly in my head.  Will take some time for it to come to fruition. 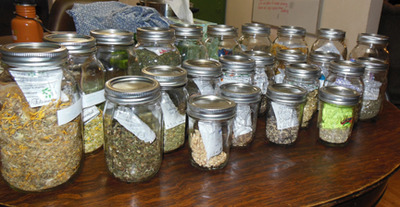