The backyard, looking towards the house.

It’s a bit of a jungle out there.  You can see the lilac monster that’s bigger than our house now.  See the purple pointy bits to the right of the house?  Yup, one of the lilac monsters.  With a crazy apple tree next to it.  Our yard is… interesting.  Oh, see that ladder by our back patio door?  A bird made a nest on the floodlight there, so we’ve watched the mama bird with her eggs, the eggs hatch, the babies grow, and grow some more.  Science right outside our door, so cool. 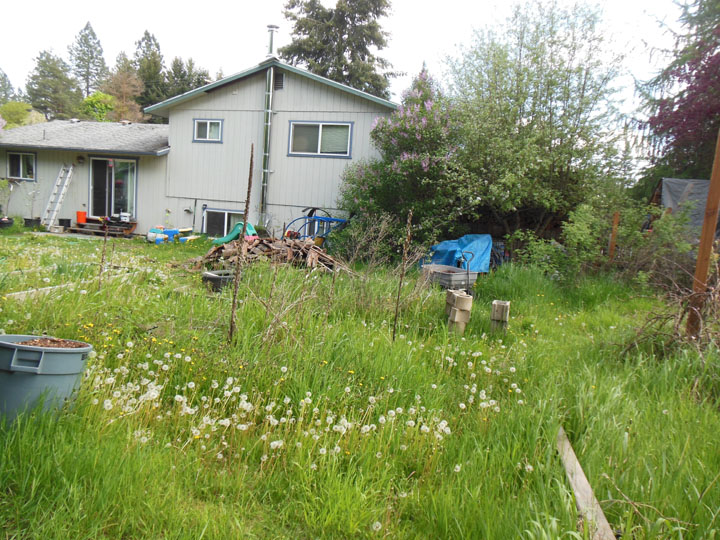 The wood pile to be chipped.  It’s all bark from the firewood and then random bits of wood from the yard or whatever. 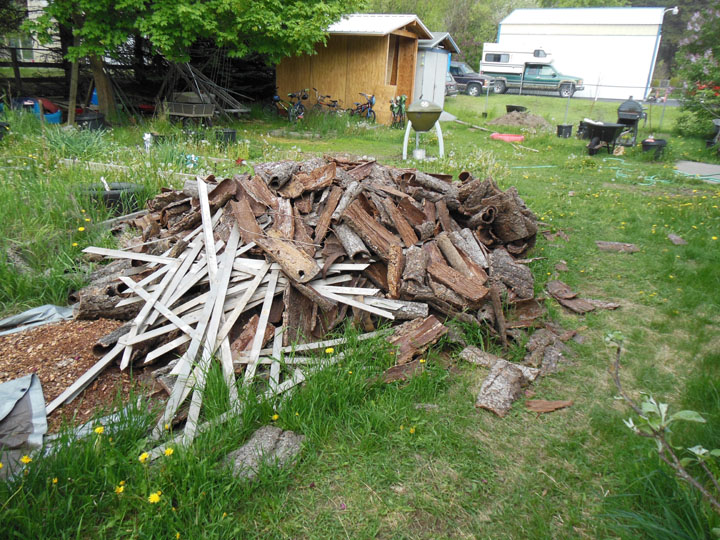 Baby cherries!  Finally!  I got the row of fruit trees in back in 2010, so I’ve been anxiously waiting for something to happen.

Four-in-one tree, from the same Costco batch as the cherry and other apple trees (I believe there is a Honeycrisp and a Granny Smith as well?).  Blossoms!!!  Yay! 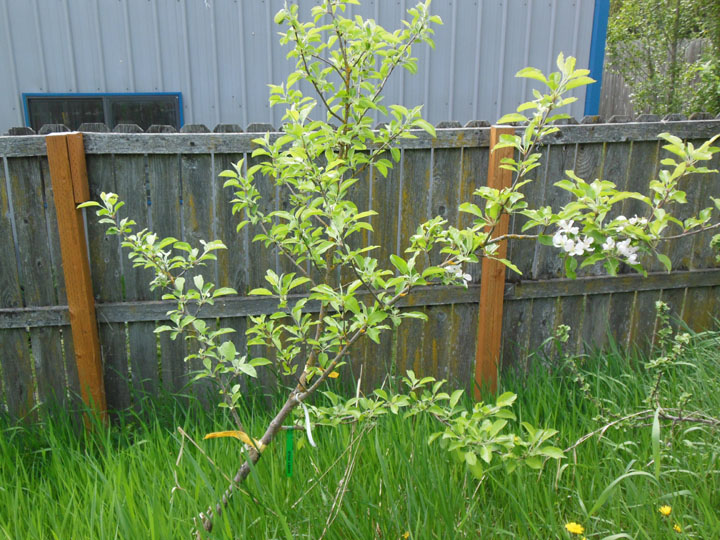 Grape vine.  We’re working on plans for a real trellis/pergola for this bad boy.  A hammock may be involved.

Um, yeah.  Unmowed grass (well, mostly dandelions now, with a little bit of grass in there for kicks).  Lots of weeds. 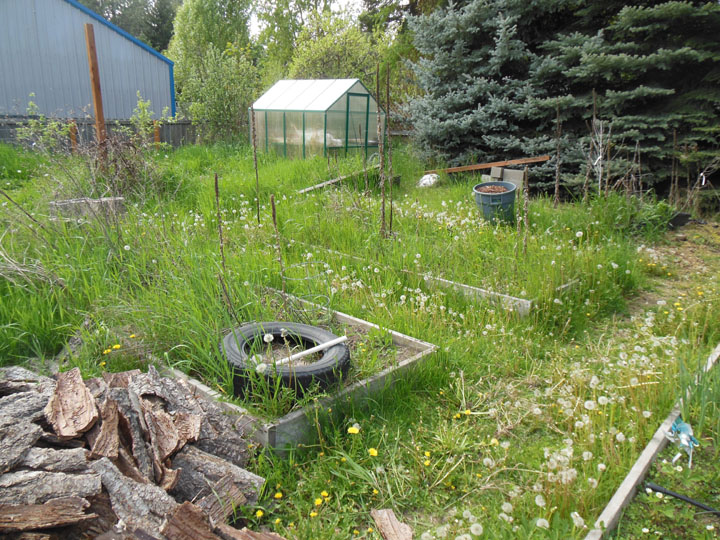 The poor raspberry patch  It hasn’t been weeded or mulched in years.  Years.   It’s a little rough.

Raspberries from the other side, by the wood rack.  I’m planning to mulch it to death here along the walkway, too.

After several hours of digging and weeding and replanting, I made some progress. 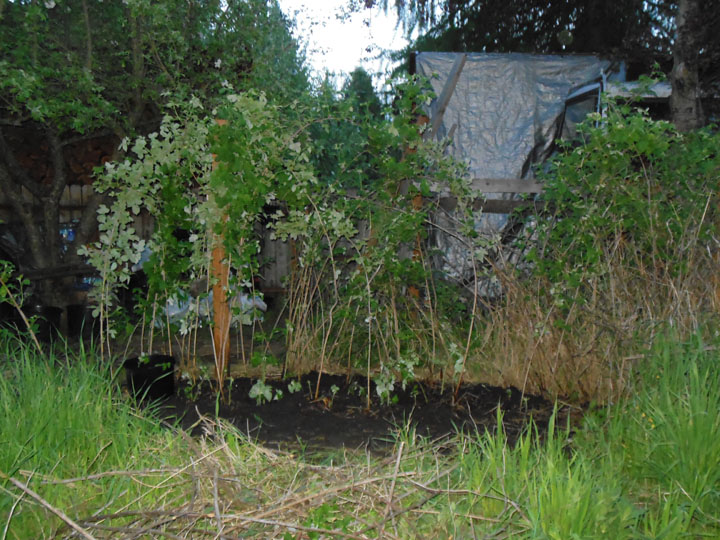 And here’s a pot of little baby raspberries to give away to friends.  Because I need to thin the herd so to speak.

Rhubarb monster.  Need to figure out what I’m doing with this sucker. 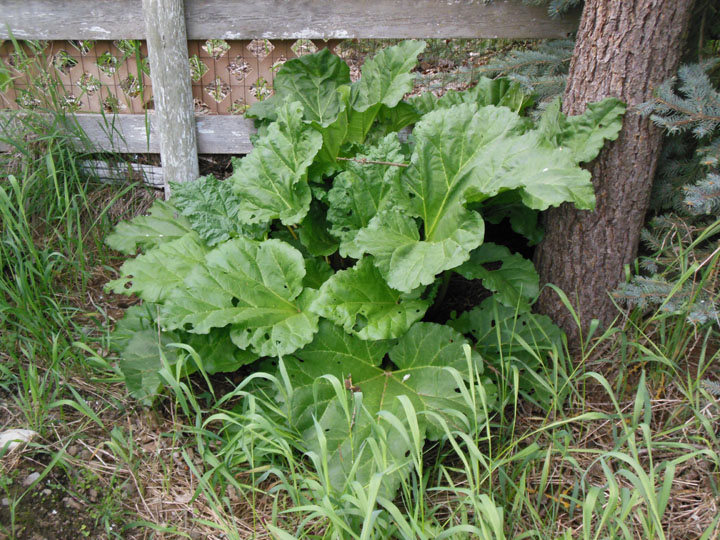 The strawberry and garlic bed.  There’s a bunch of little weeds in there again, and the garlic (well, two of the varieties) took off like gangbusters.  So even if you forget to plant it in October, there is hope.

Okay, it’s a mess of a disaster out there, but hey, it’s there.  That’s what counts, right?

From left to right from my poor patio door.  The greenhouse is at the edge of the garden.  And you can see the aging raised beds, and the pile of bark ripped off this year’s firewood.  It shall become mulch.  Lots and lots of mulch.  Look out weeds, we may have ammunition here.

Middle.  Ish.  Naked maple tree towards the back, now-defunct cinderblock bed, and shed #2 waiting for more warm and sunny days to be finished.

To the right.  A mess of now-defunct asparagus beds.  Half died, I moved the blackberries from the other one…  Sigh.  This part of the yard shall become the “orchard” but it’s still in progress.

Ahem.  Raspberries.  I have my work cut out for me weeding and retaming this bit.  Hard to believe that 3-5 years ago these were just a dozen canes that hubby hadn’t hacked off with the weed whacker.  Moral of the story?  Pull up new shoots when you see them (and give/sell them away!), and mulch these things to death.  Like 3-4 inches of mulch is what I’m aiming for.  I absolutely detest weeding.

Poor, sad grape vine.  I showed/came up with an idea of a trellis and a hammock, which hubby seemed interested in.  Apparently the answer is “always the hammock.”  So now I need to find a hammock it seems.

Edge of our property.  10yo dug me these holes last year.  Was going to plant tayberries in pots, and put the pots here in the ground.  Because tayberries will take over the world, and I don’t want to piss off our neighbor.  Yes, I’m nice like that.

Side of shed #1.  The surviving thornless blackberries from the great planting spree of spring 2008 when I was trying to garden out the 5yo.  And the thyme that has taken over the world.  Still need to weed and mulch (inches of mulch!) this little section.  Maybe get some sort of easy trellis thing going on for the berries.  We shall see.

The strawberry bed.  This is what I started with.  Who knew that unraked leaves from being lazy in the fall would be a nice insulating layer for your strawberries?  The things you learn in my house of laziness and letting nature do it’s thing.  Btw, that’s a lot of weeds.

Two days later and my very first sunburn-in-March, ta-da!  Lots and lots of little strawberry plants, just starting to perk up.  In there, I also planted garlic (because I forgot to do that in October, whoops), and after getting all the strawberries settled I planted some lettuces, arugula and spinach in here.  Just because.  Schitzo planting works, but it’s harder for me to keep track of things (even when I write it down!) because it’s just not as orderly.  And yes, I do need to keep track of what’s where, especially when I save my own seeds here and there.

I ended up needing to divide a bunch of strawberry plants.  I hadn’t been expecting that.  Only culled out a few dead crowns.  Luckily my neighbor was lovely enough to take the dozen or so strawberry plants I foisted upon her.  In all my dirted up glory (I definitely don’t wear nice clothes for gardening, yeesh).  But I think it looks pretty good.  Will be quite green in a few months.  Once my greens pop up, I’ll have to do another weeding, and then mulch this to death, too.  After putting on compost.  See how low the soil is here?  Haven’t added any since more than two kids ago.  The worms absolutely love my yard though, the kids can dig and find a worm pretty much anywhere, it’s wild.

You know those people.  The ones with the perfect, pretty, organized gardens.  Nary a weed in sight, everything’s all cute and labeled and orderly.

I am so not one of those people.  Not even close.  I’m totally wingin’ it.  Haven’t really made a super valiant effort in the garden since I was pregnant with #3, just been too worn out and taking care of kids.  I’m still winging it.  But I think it’s getting better.  Slowly.  I’m still taken by surprise when the first frost hits, I’m just distracted with other stuff.  The garden is never cleaned out/fully weeded/ready to put to bed for the winter.  So, because I wing it and don’t have the tidy little garden, I get some fun surprises year after year.

The backyard from left to right.
Left. Especially from perennial/unkillable things.  Like my chives that just won’t die.  Seriously, I started with one single 4-inch pot of chives from Lowes or Home Depot like seven years ago.  I’ve divided and given away giant clumps, I’ve just composted some plants, and I still have tons!  It even survives in containers – pots that are just sitting on the concrete deck, in black pots, and almost never get watered.  These are some hardy plants, let me tell you.
So this year I decided I’ll harvest the chive blossoms rather than let them all go to seed (again and again and again).  No idea what I’m going to do with the blossoms, but hey, one thing at a time.

It also seems my chamomile went and self-seeded last year.  Score!  Harvested a bunch of apple-scented chamomile blossoms.  Again, I can’t remember what I can use them for, but I have them.  They’ll get dehydrated somehow this week, I hope. I think my boneset came back again, or was it horehound…  need to look that up.  Anyway, something that doesn’t look like a weed and that had a now-blank plastic label stick came back.  Looks like my arnica came back, and my one specific little plantain plant has also greened up.

Also have celery and parsley in their second year of growing, so they’re throwing stalks and going to set seed for me to collect later.  Seriously, I have like a pound of parsley seed, it loves my yard.  The leeks and broccoli that have survived are also throwing seeds again, and I still have shallots and garlic in a raised bed.  I need to weed that bed and separate the shallots and garlic so they can have fun growing, but who knows what I’ll get around to.

The raspberries are hell bent on world domination.  I’m hoping I can sucker a few local friends into coming and weeding and digging up the escapees to take home, I haven’t weeded/mulched that poor raspberry patch in years.  😦 The strawberries are trying so hard to set fruit, but the poor things are competing with weeds.  Hopefully I can get that taken care of this week, gotta wait for my sunburn from yesterday’s painting excursion to calm down.

The blackberries are attempting to make a comeback.  Just need to weed and mulch it really well, then possibly figure out some sort of edging something, or just get rid of the grass and turn the whole thing there into a walkway. And as a teaser…

I’ve been working on a few things around the house, have like eight projects all up in the air at once.  This one is still in progress, but I’m hopeful it shall be finished soon.