Remember the 8.5mo?  Who’s almost 9mo?  Crawling up the stairs.  All. The. Time.  And you know what he’s going for?  The toilet paper roll someone left on the toilet paper holder again (sorry hon, but it’s true) – it’s magically appeared back on the holder at least once every day this week.  I leave the toilet paper up on the counter, because I know better.  And because I can’t just shake it off, I wipe.  So anyway, that’s a good half day’s worth of fun – climb the stairs, bat at toilet paper, get dragged back downstairs, rinse, lather, repeat.  Good stair-climber workout for me though.
Teeth-wise, the kid’s got 6 teeth already!  Two top middle and the four bottom middle.  The teeth look *huge* on him!  But then I look at the older one, and their teeth are about the same size, so it’s not so odd after all.

Turkey day in January!  Well, sorta.  Guess what we’re having for lunch today? 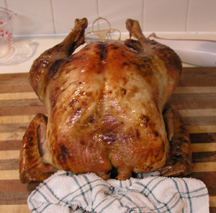 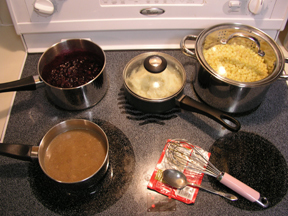 Modeling his new snow pants from ebay.  And the house covered in pretty snow. 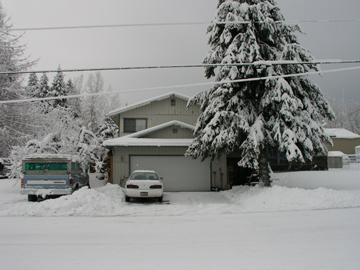 Our pretty street.  It’s so nice and quiet and pretty when it snows a bunch. 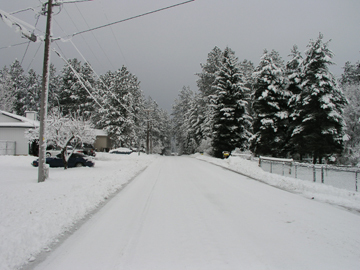 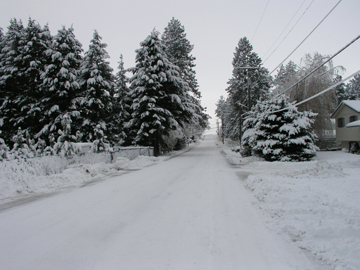 I had to shovel my backyard yesterday.  That’s right.  See the trail around the tree?  I got sick of the tantrums.
In the second photo you can barely see the garden (to the left of the shed). 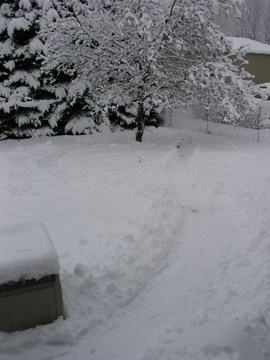 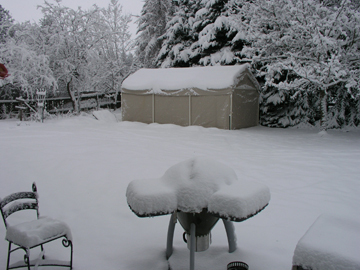